Alright. This is the 3rd different person I’ve mocked at #1 this draft szn. The word is that Trent Baalke wants Travon Walker and Doug Pederson wants Ickey Ekwonu. For some reason Baalke still has Shad Khan’s ear and gets his way here. Walker is also the favorite in the betting markets to go #1. Really though I could see Hutchinson or Ekwonu going 1 as well. Makes the first pick exciting!

This is the easiest pick. Hutchinson is Michigan royalty. Lions would be THRILLED to have Hutch fall to them here. They run the card up as soon as possible.

Houston has a terrible roster. They could go a number of ways here. But I think the free fall of Kayvon Thibodeux settles down once the actual draft begins. Texans have taken EDGE players just like Thibodeux in the past..Mario Williams and Jadaveon Clowney. They do it again with Thidbodeux.

I’m probably alone with this but I’m sticking with it. Derek Stingley Jr will be the new Darrelle Revis. NYJ needs DB desperately. The AFC East has some great receivers and NYJ needs help covering them. Stingley put away injury concerns at his pro day and should be viewed like the top 3 pick he was projected to be after his freshman season.

The first shocker of the night. The word on the street is that the Giants love the Mississippi St product. Faced great talent in the SEC and will fit in on the right side opposite Andrew Thomas. Giants giving Daniel Jones every opportunity to succeed.

Desperate is the word I’ve used just about every time I’ve talked about the Panthers. They make this selection of Pickett out of desperation. Carolina would probably like to trade down, collect some extra draft capital, and still take Pickett but it sounds like there aren’t many suitors to move up.

There are reports that CB James Bradberry is being shopped right now due to salary cap issues. They need to make a move to have enough cap space for the draft picks. Sauce Gardner is the perfect replacement. Plug him in and forget it.

Falcons have one of the weakest offenses in the league. In the last two years they’ve lost Matty Ice, Julio Jones, and now Calvin Ridley for a year. They need to build up the weapons on offense. Insert Wilson. Wilson is a great route runner, good hands, and is a big play waiting to happen. Would complement Kyle Pitts nicely.

After weeks of being the projected #1 pick Neal slides down the draft board to 9. Landing right into Seattle’s lap. Seattle’s OL is pretty weak. Have to be excited to have their franchise LT fall to them at 9.

This is what I love about the NFL Draft…anything can happen…and often weird things happen. Ekwonu is still being looked at as a top 3 pick but with the way the board fell the Jets can’t pass on him again. They can plug him in at either T slots or even guard if they wanted. Either way he’s going to be an impactful lineman.

In my mind this is one of the easiest picks in the draft. Drake London is a better Michael Pittman Jr. Wentz loved MPJ last year, and he loved Alshon Jeffery during his time in Philly. Drake London is a great jump ball receiver and I think he’s got enough speed to create separation. Adds a different dynamic to the WR room alongside Terry McLaurin and Dyami Brown.

I think that Minnesota really would prefer to trade down and collect more picks but with Kyle Hamilton sitting there Kwesi can’t pass up on him. Hamilton is versatile and can be a difference maker right away.

Yes. Yes. Ok. They just took an EDGE at 3!!! Houston’s DL is absolutely atrocious. They have to get better everywhere. Why not get really good at one of the most important positions in the game. Thibodeaux and Johnson instantly make a fearful duo.

Davis fits what the Ravens do on defense perfectly. Huge, tough, and physical. Davis is an easy pick here at 14 for the Ravens. Baltimore picked up Michael Pierce this off season but he’s barely been on the field the last two seasons. Davis gives them some insurance as well as a dominant presence.

Jameson Williams falls a little bit to #15. Eagles select another Alabama WR. It worked out the first time. Williams is an absolute burner. Can take any play to the house. Him and Devonta Smith make a terrific duo for Jalen Hurts (or someone else).

The Saints aren’t sold on Winston being the future. Just the second QB off the board, Matt Corral has quietly had a surge in draft stock over the last couple weeks. There’s even been talk he could go #6 to the Panthers. He won’t have to go too far after playing his college ball in Mississippi.

The Chargers continue to overhaul their Defense. They’ve added Khalil Mack and JC Jackson, and now they add another big playmaker in Devin Lloyd. The AFC West has more firepower than any other division and they need to slow down these offenses. Lloyd is an absolute stud. Good in coverage, against the run, and can rush the passer.

Key DL Fletcher Cox and Brandon Graham are getting long in the tooth. Philly needs to start finding replacements for them. There are some that think that Devonte Wyatt was the best Georgia DL last season.

It’s no secret the Saints need a new LT. They lost Terron Armstead when he signed a big contract with the Dolphins. Saints snag Penning here. The aggressive, nasty tackle should start on the left side on day one.

I think the Steelers might have to trade up in the actual draft. But in this mock, he falls to them. I think he’s probably a year if not two away from being a starter. But he can sit behind Mason Rudolph and Mitch Trubisky until he’s ready to roll.

Predicting what the Patriots are going to do is nearly impossible. However, they’ve lost both Donta Hightower and Jamie Collins, and LB is a huge need. Nakobe Dean is a little undersized but he could be the next great Patriot LB. Great instincts and recognition skills makes him dominant in the run game and his great IQ helps him in pass coverage.

It’s kinda a joke by now, but will the Packers finally draft a WR in the 1st round? With two selections they 100% will. I think 22 is the spot to do it. Especially if Chris Olave is somehow available.

Penn State has really produced some great pass rushers the last couple years. Micah Parsons and Odafe Ohweh have both been great since entering the league last season. Ebiketie is looking to continue the trend. A little bit under the radar, but he’s a great athlete on the outside and routinely wins with his speed. Arizona lost Chandler Jones this year and are in desperate need for pass rush help.

This is a little different that what I’ve mocked lately, but Dallas has some holes in the secondary that could use some help. Dax Hill has the versatility to play safety or the slot CB. His speed makes him a great playmaker and that defense continues to improve. Could still go OL here though.

Trent McDuffie gets all the attention but Kyler Gordon might be better in the end. He’s going to attend the draft so that tells me he’s going to be a first round pick. Bills have few needs but CB is a bit of a need.

I’m not going to pretend to know what the Titans are thinking here. They could go a number of directions. QB, WR, and OL are all legit options. But I’ve seen Tyler Smith mocked here by a lot of other draft analysts so there must be legit buzz that they like him. They have yet to find a permanent solution at RT since losing Jack Conklin to the Browns. I do however think that QB could very well be the selection here.

Tampa has addressed the OL pretty well during this offseason, but the DL is still a little questionable. JPP and Suh aren’t on the roster currently, and even if they were, they’re both past their prime in best years. The Bucs would be lucky to get the never ending motor and powerful skillset of the Greek Freak, known as Karlaftis.

Packers are thrilled with how the board has fallen. They need to keep Aaron upright first and foremost, before he can throw to any of the WRs they bring in. Zion can fill in at either guard position and be an instant upgrade over Jon Runyon or Royce Newman.

This is probably a reach but there have been reports that teams believe he could be a 1st round pick. Jackson is 6’5 254 and a great athlete. Had an incredible 36” vertical jump and 127’ broad jump. Dude’s a freak. Still a little raw but can win on pure athleticism. KC needs pass rush help in the worst way.

McDuffie is most people’s favorite Washington CB. Known for his high football IQ, and ability to athletically cover both inside and outside, somehow he falls all the way to 30. KC continues to bolster their defense which is an absolute must in the AFC West, that now has Herbert, Carr, and Russ Wilson to stop.

Cincinnati has had a good offseason. Return most of their starters from last year and completely retooled the OL. The secondary is their only real concern on D. Kaiir Elam could become a lockdown cover corner. He’s got great size and speed.

Detroit is going to be a much better team next season. They might not pick in the top 8. Not giving them a shot at Bryce Young or CJ Stroud. So they take a chance on Ridder at 32, which also allows for the 5th year option many teams covet when drafting a QB. Ridder is the #1 QB for some scouts. He showed great leadership at Cincinnati, has a big arm, and is a tremendous athlete.

Eats, Sleeps, and Breathes SKOL. The Dad and old man of the squad. Loves to dream big, and get continually let down by our teams. Outside of podcasting, you can find him texting you about fantasy football trades, being a dad and trying to find time to work on his mock drafts, or enjoying a few smooth Grain Belt Premiums. 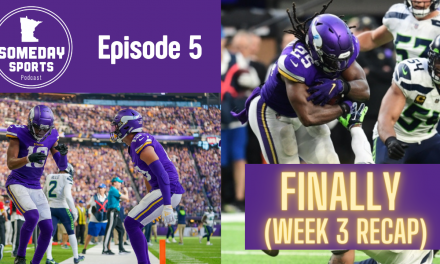