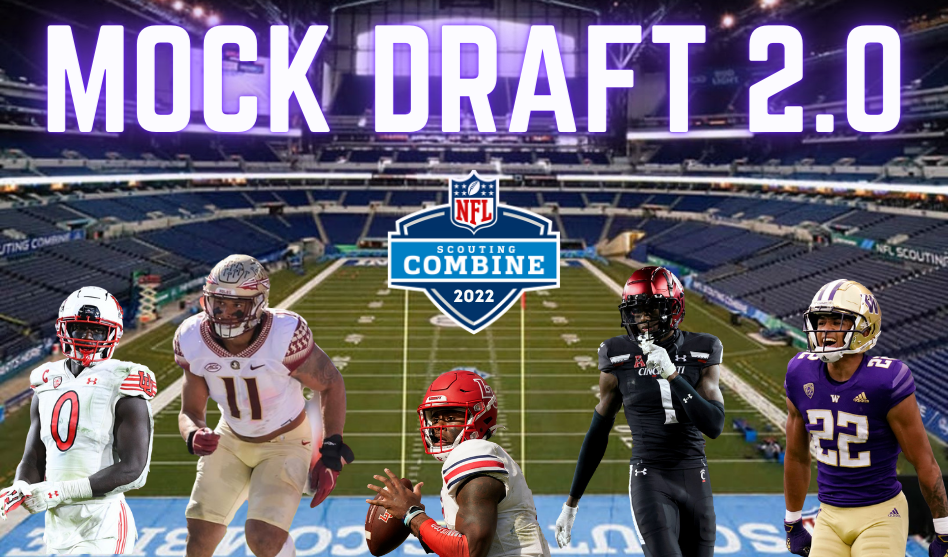 Jacksonville has needs at OL and EDGE but as of right now it sure seems like Neal is pick for the Jags. Build around Trevor Lawrence and give him time to dissect defenses. At 6’6 340 Neal is an absolute house and can dominate lineman. His size and power is too much to pass up.

WHOAH. Detroit shaking things up right at #2. Detroit saw him throwing absolute BOMBS at the combine. The Lions fall in love with Willis’ dual threat ability and just take their franchise QB at #2. He can sit behind a solid Jared Goff for a year and hopefully be ready in 2023.

With Detroit taking Willis at #2 the Texans are gifted with possibly the best player in the draft. Hutchinson will give them JJ Watt and bring the pressure for the next decade.

Tough for Saleh to pass up on Kyle Hamilton but the Jets need to continue to protect last years #2 pick Zach Wilson. Some think that Ekwonu is the best tackle in the draft this year. Falling to the Jets gives them great young bookend T’s in Ekwonu and Becton.

Giants have a great problem to have. Either take Kyle Hamilton or Kayvon Thibodeaux. They choose to go with the great pass rusher. Thibodeaux has as high of a ceiling as any player in the draft. Great speed, strength, and length.

Panthers miss out on Aaron Rodgers and Russell Wilson so they decide to address the QB needs via the draft. Pickett was a 4 year starter at Pitt and exploded his final season. The worry about Pickett is his smaller hands. But he can make all the throws and is a pretty good athlete in the pocket with enough speed to get out of the pocket.

Giants get another good OT. Pairing him up with Andrew Thomas should give Daniel Jones (or Mitch Trubisky) plenty of time to make some throws. Penning is a big dominant tackle from UNI. Big and tough. Showed out at the senior bowl. Can be a bit overaggressive at times.

Falcons have TONS of needs. Calvin Ridley was just suspended for an entire season for no reason. The defense only registered 18 sacks last season. Matt Ryan is another year older with an enormous cap hit. But right now they address the lack of a pass rush. Walker’s stock has skyrocketed over the past few weeks. It’s not hard to see why. 6’5 272 and runs a 4.51?! JEEZ. Plus he’s from Georgia. Should help put a little pressure on the pathetic group of NFC South QBs this fall for ATL

Seattle traded Russell Wilson for this pick. While they would’ve LOVED for Malik Willis to fall to #9 they have to “settle” for the best Corner in the draft. Gardner is 6’3 and ran a 4.41 which is ridiculous. He shutdown every receiver he faced last year. One of the best players in the draft.

Robert Saleh FINALLY gets his defensive weapon. Hamilton ran a slower than expected 40 time (4.57) which might cause him to slide just a little. But the production on the field cannot be argued. He’s my #1 prospect in the draft.

The Commies just made a semi big trade for Carson Wentz…no one know for sure why but he’ll be their starter. He’s had success with big receivers in the past (Alshon Jeffery, Michael Pittman Jr) and the Commies get him a big receiver here at #11. Drake is a big bodied 6’5 receiver who thrives in 50/50 situations. Perfect for a gambler like Wentz.

Vikings need CB desperately and could go Stingley here but instead opt for the BEAST of an edge in Johnson. Standing 6’5 and weighing in at 254 and ran a 4.58 40(!!!!!!). He’s an absolute monster on the outside. Relentless and violent. Love this guy. Plus he’s a native of Eden Prairie. Minnesotans LOVE Minnesotans. Plug him in opposite of Danielle and lets roll.

Cleveland needs weapons from the WR position. The OBJ experiment never panned out and all they have is Jarvis Landry and Donovan Peoples Jones. Olave brings a big play element (4.39) that is lacking and a weapon for Baker to rely on.

Once again the Ravens just let the draft come to them and have elite talent fall into their laps. Derek Stingley could have been a top 5 pick had not COVID hit in 2020 and injuries nagged in 2021. Stingley is fast and physical. Reminds me of Darrelle Revis. Not without risk but the reward is HUGE.

Devin Lloyd is my #1 LB. He’s an absolute playmaker. Good blitzer and good coverage LB. Plays all over the field. Extremely productive at Utah. Ran a 4.66 40 at the combine this year and plays even faster. Great pick for the Eagles and will make a major impact right away.

Philly picks again and goes defense again. Here they take the raw Ojabo who has about as much upside as any of the EDGE guys this year. Ojabo had one good year at Michigan but boy was it a good year. Registering 11 sacks and 12 tackles for loss opposite of Aiden Hutchinson.

Chargers are thrilled with Cross falling to them at #17. Some people have Cross in the top 10 but he falls in this scenario. Cross is a good athlete for his size. The Chargers really have upgraded their OL with Rashawn Slater in 2021 and now Cross. Great young duo of OTs

For the third year in a row the Eagles draft a WR in the first round. Reagor hasn’t worked out, but Devonta Smith was terrific. Wilson has great speed (4.38) and is a great route runner. Would be a great receiving option for Jalen Hurts. Smith and Wilson will be a nightmare duo for years to come.

It’s pretty obvious that the Steelers are looking at a QB. They’re have been some major rumors that they’re in love with Malik Willis. I could see them making a trade to move up to take Willis or even the hometown kid Kenny Pickett, but in this scenario they miss out on both. Instead they opt to improve an absolutely atrocious iOL. Najee Harris had 0 running lanes all season and still was productive. Just imagine the year he could have with a little help.

With JC Jackson headed to FA, he leaves a void at CB. Insert Trent McDuffie. He’s a compact CB with great cover skills and a willingness to tackle and defend the run. Few CBs that are tougher and more aggressive than McDuffie. Only knock is the short arms, but the effort and toughness will overcome that.

I don’t know if you’ve noticed but the AFC Wild West is absolutely stacked. 6 of the Raiders’ games are against Russell Wilson, Justin Herbert, and Patrick Mahomes. That’s just brutal. They’ve gotta stop the pass. Insert Andrew Booth Jr. The best CB still on the board. Booth missed the combine due to a quad injury but shouldn’t hurt his draft stock too much. Still a great cover corner and great against the run.

Arizona gets an absolute machine in Karlaftis at #23. He’s got a motor that just doesn’t stop. Karlaftis didn’t have many sacks but he’s constantly in the backfield creating chaos. He’s great against the run as well. Should help the Cardinals slow down teams like the Rams and 49ers in the NFC West.

It appears that Amari Cooper will be cut soon. This leaves a massive hole at WR for Dallas. They fill that hole with the 6’4 NDSU product who can run a 4.36 which is insane! Watson is raw still and played at a smaller program but his big play ability (nearly 20 ypc in 2021) and potential gives him the opportunity of being a 1st round pick.

The Bills have very little weaknesses or needs on this team. So they take BPA in Williams and can allow him to recover from the ACL tear he had in the National Championship and give Josh Allen a deep threat for the next half decade. Super easy.

Little WR run here. Tennessee needs more weapons on the offensive side. AJ Brown frequently deals with nagging injuries, Julio is always hurt, and Derrick Henry was just hurt for an extended period of time. Treylon Burks gives them another big bodied big play weapon that would fit in well with a Titans team that likes to bully the opposing defense. Burks is 6’2 225 and physical. The combo of him and AJ Brown will beat up every CB duo in the league.

Only a few weeks ago the Bucs had one of the better rosters in the league..now Tom Brady retired, Ali Marpet retired, Ryan Jensen doesn’t appear to be coming back, and they’re potentially losing JPP and Suh. Lots of needs. But they decide to fill the need of iOL here at 27 with Zion Johnson who can play both C and G.

Mafe is just oozing with potential. Has the prototypical size for the modern day edge 6’4 260 and runs a blazing 4.53. Great athlete with a nonstop motor. If Miami can tap into his potential they’ll be looking at a double digit sack guy opposite of last year’s 1st round pick Jaelen Phillips. The bookends will be nightmares for Josh Allen, Mac Jones, and Zach Wilson

Wyatt is a 3 down DT and can actually produce a pass rush up the middle. The Chiefs play in the high fly AFC Wild West and will need to slow down these premier passers. Wyatt can get on the field right away and stay out there. He’s relentless and always in the backfield.

Cincy has been struggling with the OL for the last two seasons. It was arguably the reason they lost to the Rams in the Super Bowl. They can sure up the OL a little bit with probably the best C prospect coming out of college since Garrett Bradbury. 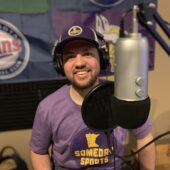 Eats, Sleeps, and Breathes SKOL. The Dad and old man of the squad. Loves to dream big, and get continually let down by our teams. Outside of podcasting, you can find him texting you about fantasy football trades, being a dad and trying to find time to work on his mock drafts, or enjoying a few smooth Grain Belt Premiums. 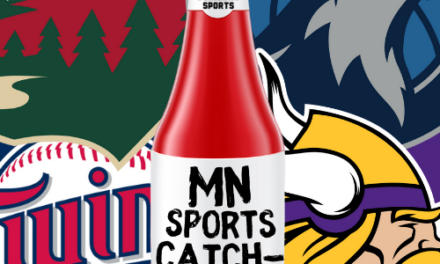 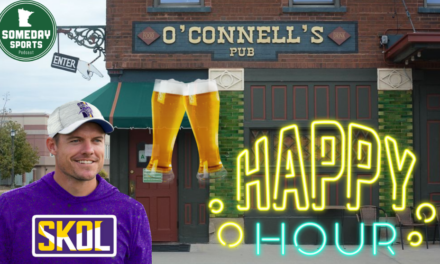